Rethinking the Tradition of Marriage

You can also read this piece in Nepali, translated by Anshu Chhetri here.

My family often makes me wonder if the tradition of marriage originated in India. Our ancestors planted saplings on the fertile Indus valley, got married, produced children and the saga continues. Is that how an entire civilization grew? I have been trying hard to make sense of the word ‘civil’ in civilization. My history books don’t provide sufficient evidence to convince me that all civilizations are/were truly civil. The temple walls bear sculptures of women with naked breasts, bulging bellies, making love to each other. While many consider this obscene, others argue that society was way more progressive back then. Perhaps marriages back then weren’t an institution. Perhaps society didn’t exist then.

The oldest person I knew, died a few years ago. For her, marriage was a promise, her pride, a responsibility after being a parent, an investment for her kids and lastly, a beautiful memory. As a child, I didn’t know if it was a norm. I would often wonder if it was even possible for somebody to be not proud of their marriage. Or be unhappy in it?  At home, I was taught that ending a marriage, or loving someone else after getting married was antithetical to the values of being “civic”. But this ignores the prospect of people evolving and making different choices. Doesn’t it?

Sometimes, I find myself stuck in a tumultuous situation during a family dinner, when they romanticize fasts and label the mangalsutra a symbol of fidelity. I feel like I am fighting an internal war with my own perspectives sullenly resting on a trampled space, where everything is scattered, ambiguous, waiting for validation. This spirituality associated with marriage rituals makes me think: why don’t people seldom attempt at making them work instead of hoping for some miracle?

The most visible manifestation of every perfect marriage is a family dinner. An outsider watching such a couple at such a table with people sitting around having a good time might think that this is a great bond to cherish but the closer you go, you hear my granny’s voice, coarse with the beetle juice tricking down. You hear my father’s persistent humming and my mother’s swift hands picking up the unchewed vegetable husks, and leftover bones from the table. If you observe more intently, you will sense my mother’s discomfort and my granny labeling it as an ideal, making her fondest memories a custom. Marriage as an institution dies many deaths during tea time when discussions center around jewelries and dowry. I raise my inhibitions but my granny’s cough drowns out my feeble voice.

My ancestors got married when there were less divisions. They didn’t have pre-made families like the existing small clubs today that forcefully make you a part of them. They didn’t have so many social obligations to take care of I guess. The fact that they were the ones who tied the knot, reproduced and that’s how society emerged, makes me a little sad. It’s strange that people were streamlined and made to follow a certain religion. Castes were created for division of labor and “better management of work.” This was also how resource crunch started to happen and began aggrandizing power in selective hands. The trees were cut, industrialization took place, people became rich, certain sections went downhill in terms of their wealth and the caste and religious divide became steeper. As societal pressures started to mount up, people started draining their wealth. But society never accepted some as part of it, they were termed as untouchables. This made them poorer, the division of labor became more brutal and confined them to the circle of chest ripping exploitation. Poverty and lack of resources started alienating them from mainstream society while every varna developed as marriageable units of their own. Getting married out of this unit was treated as impure and later scornful.

The child in me touches upon the happy memories of eating sweets on banana leaves, meeting relatives and friends, applying henna, and wearing beautifully hand woven sarees during weddings. But adult me has become more cynical of these rituals. They act as a lacy glimmer on the already existing customary menace, don’t they? If I try to get married out of the niche marriageable unit that I belong to, it will be considered a “betrayal of our identity,” says my granny who herself doesn’t conform to any pre-ordained identities. If marriage is the only way to be, why are the mandir walls adorned with sculptures of devadasis, apsaras who never get married despite being the most beautiful women? The greatest and oldest civilization treats them as prostitutes and doesn’t consider these women deserving of the “respectability” of marriage. Neither caste, nor sex servants is their identity. They aren’t allowed to be someone’s soul mate. That is considered their fate. Why?

Brahminical hierarchy terms our identities as gotras derived from some sage’s name. Despite being aware of all of this, I find it strange that people would still want to take this civilization forward. If marriages truly originated in India and the word ‘civil’ came from sanctimonious marriages, then I would want to get married without a name, without a skin, without sex organs, with my conscience so that even if I fall for the wrong guy, I have the liberty of moving out, loving someone else and living without titles, and without the unwanted pressure to mend and make things work! I want to live in a world where children are born out of love and identities specified only when desired.

Garima Mishra is an aspiring writer, story teller, and a student at Delhi University. Her works are forthcoming or have appeared at The Remnant Archive, Ayaskala, Vagabond City Lit, Cathartic Lit, Borderless Journal, Inertia teens and elsewhere. She wants her voice to heard and hence amplifying it is her dream. 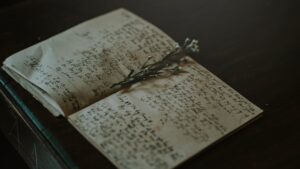 #LoveMonth Notes on love and relationships, friends and their experiences, films and writing and maybe climate change … It was Clothing: The Forgotten Art of Influence

How are first impressions made?  Shoes? The way people talk? Their hair? Mobile phone models?  While it’s different for different 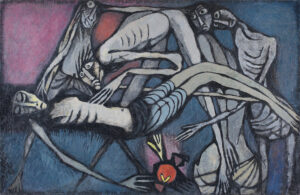 Black Goo in the Falling Man

TW: Death by Suicide, Self harm, Drugs, Grief In this piece “Black Goo in the Falling Man: A Reflection on