Growing up in India is not easy. Most of what is discussed abroad is spoken about in code with any explanation. Parents further make it a hush-hush affair and try to brush it under the carpet.

When a child asks their parents how they were born, parents tend to get super awkward and look at each other, as if fishing for an answer. Parents explain this by saying something really childish like “The Gods had sent you to us via heaven,”, or the famous story of a stork or an angel putting the baby in a mother’s belly. Parents usually get annoyed when their child constantly asks these questions and eventually try to shut them up.

Most of us must have undergone a horrifying teenage phase when our parents tried talking about sex which is considered a huge taboo in Indian families and society. The awkwardness one experiences around parents when they try broaching the topic of sex or when condom ads appear on TV makes us remember the need to do random stuf like filling water, dealing with a headache or worse – acting all coy and innocent as if we were alien to the concept of sex or anything sexual.

She then feels weird and disgusted and reacts by saying “Chee” after her best friend Ginni enters her room.

The next scene shows Sugandha sharing her problems with her. Youngsters in India find it comfortable to discuss sex with their best friends without any judgements and awkwardness. 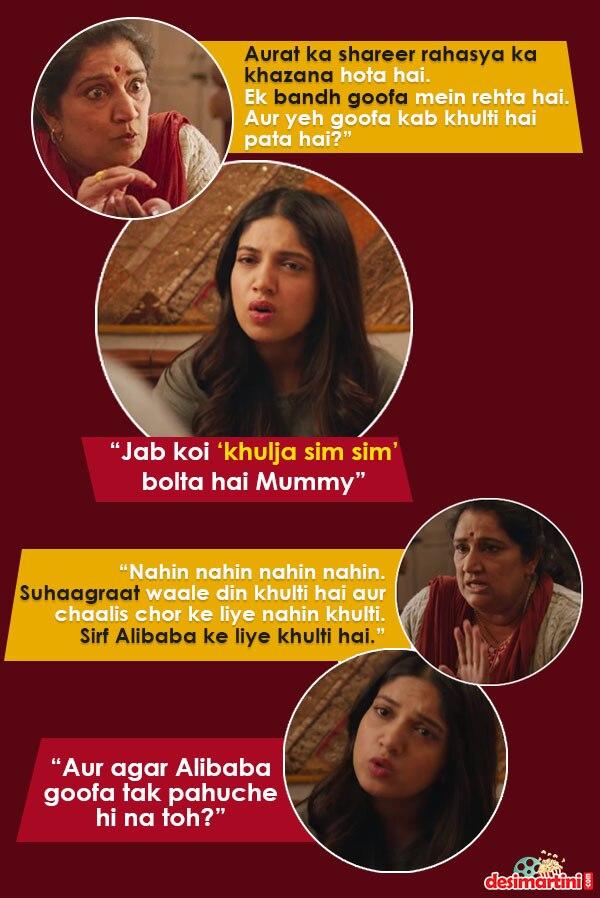 South-Asian parents share a conservative mentality which is understandable, since that is how society was organized when they were growing up. The new generation kids with their progressive thinking end up challenging their parent’s old fashioned views by asking questions. This leads to an uncomfortable environment and regressive mind set since sex was never addressed by their parents when they were teens.

Young adults usually have a positive or fairly respectable image of their parents. It is difficult to visualize parents having sex due to different cultural influences. We are seldom taught to view them as consenting individuals making their own choices.

This topic was subtly touched in the film Badhaai Ho when Ayushman Khurana’s character is making out with his girlfriend, Rene, who asks him,“Are parents supposed to be doing all this?” She throws a pillow at him! In the next scene she asks him “Do you find it embarrassing that your parents have sex?”

Thinking of his parents as sexual beings makes him feel gross. For that matter, even in real life, if we visualize our parents in a sexualized way, it makes us feel awful and disgusted.

Our parent’s generation was expected to get married, have kids and live in happily – the idea of perfect domestic marital bliss trumping their sexual desires. Furthermore, our parents are representatives of a generation that believed in raising a happy family, whatever that means.

It is important for Indian parents to talk about sex without any inhibitions and judgements. Parents need to have an open mind and understand that their kids may not always be wrong, and it is certainly not wrong to talk about sex with them rather than shying away from it. It is high time parents accept that their kids may have ideas similar to theirs. As we start adulting in our 20s, we become financially independent, have relationships or sexual relationships. This is the point in our lives when we are trying to deal with everything that life throws at us.

When Parents break stereotypes and societal taboos related to sex, it not only helps young adults in figuring sex better but also helps them find a friend whom they can confide in and share about their sex life without feeling judged. It may initially seem difficult to talk about it but it is important for parents to talk and educate their children about sex because if parents will not talk about sex, they are making their young teens vulnerable to unpredictable and irresponsible behaviour. Making them understand everything about safe sex, celebrating their first time of having safe sex as a milestone in their life instead of frowning upon it, is a step towards a new future. Understanding that one’s image or honour in society is not linked to the sex life of one’s child is crucial.

Sex is important for human beings since we are social animals, and it is also considered a basic need just like hunger and thirst. It is important for one’s well being and should be a normal topic. Parents should forget about the awkwardness and keep an open and transparent relationship, and be sensitive and empathetic, so that both the parents, be it mom or dad, don’t have a hard time opening up to their children.Unless parents don’t develop a sex positive atmosphere in their own homes, it will be difficult for children to open up about it.  Parents should also teach boys about consent, being mature and responsible.

Parents need to change their thinking and attitude about sex with chnding times. Parents should learn to talk about sex while leaving behind the awkwardness, prejudices and inhibitions involved in it, because they were just like their kids in the prime of their teens and youth.

Saumya is a Mumbai girl who loves writing, traveling, and the camera. Writing is something she is extremely passionate about and words are a beautiful medium to express her thoughts and feelings. She also finds refuge in writing poetry. She calls herself a Blahck Sheep because she does not fit into a box and loves writing on topics that are unknown or considered a taboo, as it lets her speak her mind.