The Price of Conformity: ‘There was nothing I wanted more than to discover myself and the world outside’

A Young Woman Reflects on the Lasting Impact of a Conservative Upbringing on Her Relationships, in this personal essay titled “The Price of Conformity” for The Blahcksheep.

Note from the writer: As a feminist, I believe that building relationships (romantic and platonic) is crucial for young girls to develop meaningful lives and if they are held back from doing so, it can cause deep rooted emotional damage. My essay originally titled “A Eulogy for Friendship” traces my experiences of growing up in a home where I did not have the agency to pursue connections outside my family and the lifelong sense of loss and regret it has left me with. Centering my life around my parents and the control born out of their anxiety, there was nothing I wanted more than to discover myself and the world outside. The purpose of this essay is not to demonize parental figures but to mourn the loss of an “unlived life”. It is important to me because not enough is written about this particular aspect of women’s lives. If I could read about other women who have had the misfortune of being robbed of something as important as friendship and the ways in which it has impacted them, I would feel less alone and inadequate. There are so many women who feel this void in their lives without always having the vocabulary to describe it and it took me quite some time to find the right words. I see my essay as a feminist text that seeks and extends solidarity through the medium of lived experience that represents a much larger reality.

Note from the Editor, The Blahcksheep: If you’ve been through a similar experience and would like to write about family, friendship, or the lack of it, send us your blahs at theblahcksheep@gmail

It’s a really hot and busy weekday afternoon and I say “yes!” Another day filled with complaints about the weather and seemingly urgent tasks (replying to an email and marinating the chicken for dinner) that will help me successfully distract my treacherous brain from sinking into a despair that feels like second nature. Let’s say an imaginary friend asks me what this despair is. After a good deal of overthinking and obfuscation, I would grudgingly admit to them that it is in fact disconnection, the root of my despair. While typing this, I googled disconnection to check if I had spelt it correctly (is it just the “n” which is double or the “s” too?) and google describes disconnection as the “state of being isolated or detached”. Sounds about right.

For as long as I can remember, the only thing I ever wanted was to be alone. It meant having time for myself, it represented freedom to me, it was supposed to be my nirvana and I was sure I would never need anything else once I had it. So I dedicated every ounce of my being in achieving it and after 24 years of desperation when I finally found it, I adopted it as a way of life. I successfully convinced myself that it was enough, that the yearning for friendship and connectedness is completely absent in me, that my intensity for independence makes me immune to needing other people and this is exactly what contentment feels like. Okay, that last bit is only partially true.

Coming from a conservative and co-dependent Muslim family that could only survive because the daughters were willing to carry around the inescapable shackles of care and duty at all times, the freedom to “just be” without any surveillance feels like a wild dream God granted in a moment of kindness.

But what exactly is my problem? The problem is that I was and am, deeply lonely (hence the imaginary friend). What I was seeking was solitude. “Alone without being lonely,” as the cliché goes and what I ended up with is isolation, solitude’s scary cousin. It feels powerful because I finally have control over my time and space and yet it does not feel enough. I know that extreme self-sufficiency born as a coping mechanism is not desirable, no matter how much I try to rationalise otherwise.

I say 24 years because that is when I left home for higher studies. My home is where I stayed with my family – my parents and my wonderful siblings. My parents formed the entirety of my life before I left. My every thought, mood, decision and discussion was controlled by them. “Why do you need other people? Are we not enough,” they used to ask me, both directly and indirectly. Directly through heated arguments and indirectly through hurt silences. All this to communicate that there could not be a bigger betrayal to them than my curiosity and need for finding connection outside of the family unit. Their love was supposed to fix my bottomless pit of uncontrolled desire for engaging with “other people” but it did not, so I repressed it. I focused on achieving freedom instead.

The one thing that they were always very particular about was a good education because for us as a community, there is no other recourse except education to lay claim to a future that allows any semblance of dignity in this difficult country. And so I studied, to a level which if statistics are to be believed, puts me amongst an extremely small and anomalous group. I am grateful to be a part of this group because it was my education that ultimately freed me. Education opens up agreeable avenues for women to build an identity outside of their home and family; the only other alternative being running away with severed family ties that can be a dangerous and unthinkable prospect for those of us who grew up so sheltered that the only safe way out we can imagine is a marriage to a benevolent man who would allow us some degree of hasti – a sense of a self, no matter how limited.

Did this create as much of a dissonance in my parents as it did in me? This contradiction where they wanted me to be extremely successful through my education but without going out into the world? They used to give me examples of famous and successful women (only in “respectable fields” though) and tell me that they wanted me to be exactly like them. That they would support me in getting there if I just kept a sane head on my shoulders and stopped getting distracted by the world. I used to wonder, did these women get successful through sheer force of concentration while continuing to be confined within the four walls of their home? Turns out no (what a surprise). Of course, much to my dismay, I realise that even if I had all the freedom in the world, I would still have been unable to emulate some of these women solely due to my identity but that is a different story.

My parents were trying to sell me a dream that I am not sure they believed in either. This contradiction was a result of their need for control, which they could never let go of. A control which was a result of love hideously morphed into fear which is characteristic of most Indian Muslim families. It is an acute fear of the unknown, of a world that is hostile to who they are, of men that would inflict irreparable harm to gain a perverse sense of victory and revenge. A fear that made them hold back their daughters with reins so tight the scars from it will last a lifetime.

The fear was further complemented by a need for respectability which could only be achieved by staying hidden and insignificant. So when I constantly found myself in spaces that my education had opened up for me, I was never able to fully immerse myself in them. These spaces felt alien to me. The immersion would have required so much of my time and how could I have given it if I was always on an invisible clock, running out of time? The immersion would have required emotional investment and how could I have given it to any other relationships after being left with so little, having given away most of it to parents who were perpetually threatened with redundancy by any assertion of agency. And in these spaces that I desperately wanted to immerse in were people who I wanted to connect with so deeply but failed …

It is not as if I have never had any friends but these friendships were always in the background. The forefront of my life was spent in surviving and soothing my parent’s anxieties. There are people who talk about their time in school and college as being the best time of their lives. The carefree years, the romance, the fun and the friends. K.K’s embarrassingly sincere song being played at the farewell. The depth of hostility and indifference that I simultaneously feel towards that song would startle even the bitterest of cynics. It is not the song which is the problem though or the people with the sepia memories but my unattended grief which keeps catching up with me.

My grief over all the lost years that I too could’ve spent cultivating nostalgia for. My grief over having “started” life late and still not quite. For as long as I can remember, I have pushed this open psychological wound that is my ache for connection and friendship so deep inside my subconscious that I fooled myself into thinking I had gotten over it. In reality I had not gotten over it but instead had cruelly forced myself against my own nature; the price of which is a perpetual struggle to open up to connections even as the parental control remains no more. There’s much to be said about the beauty and strength of an intimate connection which allows you to be witnessed at your most ordinary and most brilliant. Beverly Clark told us this witness would be our partner, I’d rather it be a friend.

Aiman indulges in long flights of fancy as a way of coping with an overwhelmingly imperfect world. When all else fails, she writes and makes art (secretly). Her self-destructive habit of escaping into herself means that she often comes across as extremely odd and since she does not have the generational wealth or social capital to be described as eccentric, black sheep is a befitting adjective for her. 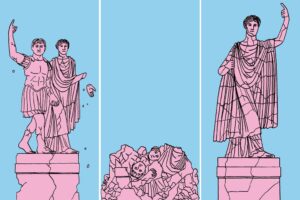 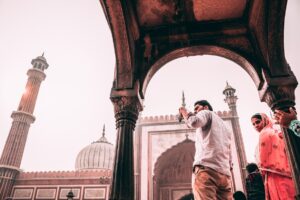 A Pool of Shoes

Outside the Masjid, I see a pool of footwear. And I recall the feet of men and women in them. 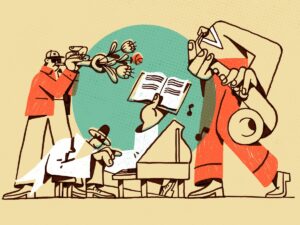