Most atheists turn to atheism after having had some exposure to the ideas of religion and God. But the vice versa isn’t true when it comes to theists – at least the present-day ones. I belong to the category that says ‘I don’t know, so I’ll be as aware as I can and control what I can do to the best extent’. This piece is a purely contemplative one, and I’m up for further discussions.

It’s been a long time since we met. Was wondering if the virus and those responsible for the pandemic would end up in hell.

Of course, it is hell that the virus shall receive.

How are you so sure?

Because I will be there to see it, surely.

You mean to say you shall be in hell too?

(Slightly raised voice) I meant I will be there to facilitate the process!

I see, you have immense power then, don’t you?

Yes, the Almighty has blessed me and bestowed special powers upon me.

I see, I see. Then you might as well have stopped the virus from spreading – couldn’t you have done so sir?

It was not my plan. It was God’s plan. (Drake’s music playing in the background).

Right, and how has it been going on for you, off late sir?

People donate and it helps maintain the institution and our needs but it’s been way too long since people have come here…To hell with this bloody virus!

Bloody, you say? Thought you were a priest and peace is what you wanted.

I only used the word to denote my feelings; I do not propagate war.

Sadly though, wars and fights do take place often in the name of religion.

Misguided individuals. There are some exceptions, always children.

I thought you were an exception and thus, you served this great role.

Yes, a great role and a gift from God. To impart lessons to the better population is my duty.

And that is so that…?

They can become better individuals. God gave us the role of leading the masses to him.

God needs us to help open up the eyes of others.

He/she/it could have as well opened up people’s eyes themselves. If they couldn’t, then why is he/she/it God?

Because his way of receiving help from us is a learning process for us.

OH! My bad. And what is it that God would like us to learn sir?

That we believe and trust in him. God has his own ways. I know not his plans all the time.

Indeed, God has his own ways.

Yes, and hypocrites like you shall be punished. In hell, you shall burn.

That you shall see if you reach there too. But Did you not say that God gave us the plague and the pandemic to teach all of humanity a lesson?

Yes, I have said that before man.

I know I’m a man, sir. I hope you are too, for to be in that position you need to be one. Partial is a God who discriminates between men and women.

Women aren’t allowed to do everything because they menstruate each month.

And it is God that made the women menstruate.

Yes, and for a reason.

Very well. If the god created the virus and then the humans. And the humans in a flawed manner such that they need a lesson, wouldn’t it have been easier and smarter to create flawless humans in the first place? His job became easier and our jobs became easier and we could’ve spent more time praying to him than facing our everyday difficulties?

Precisely the point. People don’t thank and remember God when on happy occasions. They reach out to him only in times of crisis.

And should one reach out and thank him in happy times?

To show gratitude. To be humble. That is why we pray every day.

Because God created us all, and in thanking God we thank them all.

And you think that each time a person you pray, the person next to you assumes “yes, she is indeed grateful for my service.”

That is the fault of the man.

A fault ingrained by God indeed.

And it is so that the man can grow and learn.

While believing in something/someone he is not sure what it is.

So that the man can learn his lessons.

Well, maybe the virus does that for us. But in that case, the virus serves a good role, why then should it be in hell?

For though it helps humanity, it is evil.

God made it evil so that it can teach us a lesson and God punishes his pet for teaching us a lesson? And if God is real and people’s prayers are heard, then shouldn’t the pandemic have ended by now?

And for God to help, he/she/it needs to be prayed to?

Yes, why should God help us for no reason?

So, you mean to say God is like a businessman who barters help in turn for prayers?

Believing in God Gives people solace. That there is somebody who they can count on.

Agreed, belief in God gives people solace, consolation, and even happiness but also a chance to not be unaccountable. Trust in someone who is so mysterious and has his ways of functioning and thinking? Somebody, who I’m not sure who he is or even if it is a ‘he’ in the first place? Sounds like a stranger, more like, if I were to be honest. Had I told my father how much he means to me and how much I depend on and trust him, he and I would have felt better.

You tell me, son, what is the purpose of life then?

You have very well claimed I serve no purpose.

I never said that.

And when you have said so, why would you like to hear my answers? A one-sided view is dangerous and a biased man knows not to listen.

If at all had you not been biased, you would have heard what you just said.

There is a prayer that I need to attend to, which you are well aware of. Why then do you stop me and ask unnecessary questions?

It probably is God’s plan indeed.

PS: A one-sided view is dangerous. God gives people solace, and if it keeps you happy, remain happy and informed. But to go beyond and enforce it on others, and never question yourself might not be the best thing to do. I also never said that God doesn’t exist, for I don’t have the proof for it, and thus I can’t and won’t make that claim either. I don’t know.

To theists, if you find this offensive, it was God’s plan. To atheists, Mrunali has not had enough interactions with you. If you’re willing to have discussions with her, please mail her at @mailstomrunali@gmail.com. 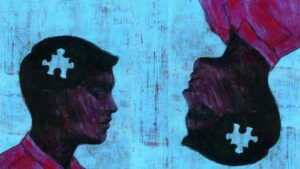 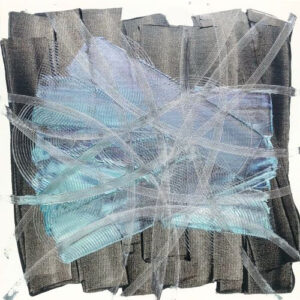 To Defy the Laws of Tradition

In my current work, I find myself drawn to the use of metallic, iridescent, and fluorescent colors in combination with 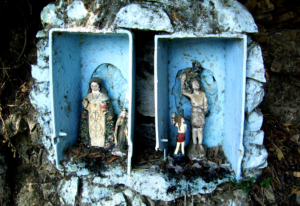 “Naked and like a raisin, a wrinkled knob of our imagining…” a poem on God by Mitra Visveswaran My friends